Ants have been living on the Earth for more than 100 million years and can be found almost anywhere on the planet. It is estimated that there are about 20,000 different species of ants. For this reason ants have been called Earth's most successful species.

Ants build many different types of homes. Many ants build simple little mounds out of dirt or sand. Other ants use small sticks mixed with dirt and sand to make a stronger mound that offers protection from rain. Western Harvester ants make a small mound on top, but then tunnel up to 15 feet straight down to hibernate during winter. Ant mounds consist of many chambers connected by tunnels. Different chambers are used for nurseries, food storage, and resting places for the worker ants. Some ants live in wood like termites. Army ants don't make a home at all but travel in large groups searching for food.

Ants are social insects, which means they live in large colonies or groups. Some colonies consist of millions of ants. There are three types of ants in each species, the queen, the sterile female workers, and males. The male ants only serve one purpose, to mate with future queen ants and do not live very long. The queen grows to adulthood, mates, and then spends the rest of her life laying eggs. A colony may have only one queen, or there may be many queens depending on the species. Ants go through four stages of development: egg, larva, pupa, and adult.

Ants have three main parts. The head, the trunk(middle section), and the rear or metasoma. All six legs are attached to the trunk. The head consists of the jaws, eyes, and antennae. The eyes of ants are made up of many lenses enabling them to see movement very well. The antennae are special organs of smell, touch, taste, and hearing. The metasoma contains the stomach and rectum. Many species of ants have poison sacks and/or stingers in the end of the metasoma for defense against their many predators. To see a diagram and learn more about ant anatomy visit our Ant Anatomy page.

Ants do not have lungs. Oxygen enters through tiny holes all over the body and Carbon Dioxide leaves through the same holes. There are no blood vessels. The heart is a long tube that pumps colorless blood from the head back to the rear and then back up to the head again. The blood kind of coats the insides of the ants and is then sucked into the tube and pumped up to the head again. The nervous system of ants consists of a long nerve cord that also runs from head to rear with branches leading to the parts of the body, kind of like a human spinal cord.

If you watch ants for any length of time you will see that they really do communicate with each other and very effectively too. Ants communicate by touching each other with their antennae. Ants also use chemicals called pheromones to leave scent trails for other ants to follow.

An Ant Habitat lets you watch and learn about the fascinating world of ants in your own home. Life Studies will be happy to get you started. We have a several Live Ant Habitats . We will also send you the World's best tunneling ants (Western Harvester ants) for your observatory. Use the links below to find out more about ants and start your own observatory. 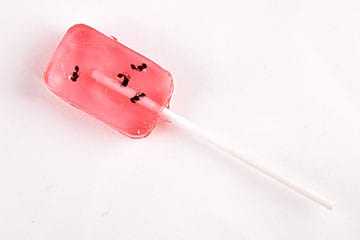 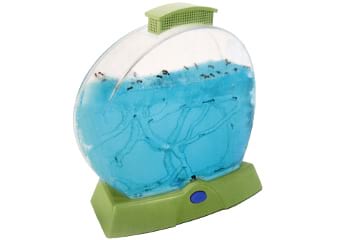